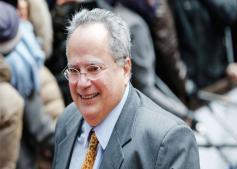 a day of flowers and struggles, smells and hopes,

of dance and song in the demonstration,

of raised fists and discreet glances of love,

a beautiful day made of battles and love affairs.

Τhis was written by new Greek Foreign Minister Nikos Kotzias, in an SMS message to his friends on the first day of this month.

But, far from being a month of sweet smelling flowers and love, May has been more of a month of struggles and (near) fist fights for the new government in Greece. Its first four months in power have been a tough period of negotiations with the country’s creditors – the EU, the ECB and the IMF – on a new “cash against reform” deal, that so far has not borne any real fruit; this period has even been described as “one step forward, two steps back.”

There is little hope for a final deal in today’s Eurogroup meeting. And even worse, German Finance Minister Wolfgang Schaeuble warned of the possibility of a sudden default if the right steps were not taken.

Αgainst such a delicate political background, Kotzias begins his first official trip to Turkey today with a series of important meetings. After his customary visit to the Greek-Orthodox Patriarch Bartholomew in Istanbul, he will be received by Turkish Prime Minister Ahmet Davutoğlu before proceeding to Ankara to have meetings with his counterpart, Mevlüt Çavuşoğlu, and Turkish Defense Minister İsmet Yılmaz.

In three months as the head of Greece’s foreign policy, Kotzias has followed a frenetic schedule with visits from Peking, to Moscow, to Washington and to Brussels in an effort to apply a new, proactive “multidimensional foreign policy.”

With deep knowledge of the intricacies of Turkish-Greek relations since the time he served as an advisor to former foreign minister George Papandreou in the late 1990s, and a force behind the so called “earthquake diplomacy” of the same period, which initiated a long period of Turkish-Greek rapprochement, Kotzias insists on bilateral dialogue. However, he calls Turkey a “difficult neighbor” and thinks that “Turkey’s hegemonic policies should be curbed.” Problems should not be allowed to accumulate, he says, adding “Turkey should not be allowed to challenge our sovereign rights and then to try to reduce them to gray zones and finally transform them to an issue of its own rights.” Still, he said one of his aims during his current trip to Turkey is to establish long lasting confidence building measures.

Κotzias visits Turkey at a crucial moment regarding Cyprus; just after the election of Mustafa Akıncı as president of the Turkish Cypriots and while intercommunal talks seem to be to re-starting. He has expressed his views on the Cyprus issue strongly several times. Days before he took over the Greek foreign ministry portfolio he had said he would “defend the right of any Turkish Cypriot under one condition: that not a single Turkish soldier remains on the island.”  He repeated it recently: “There is no solution on the Cyprus issue unless the last Turkish boot leaves the island… unless national sovereignty and territorial integrity and independence of the Republic of Cyprus are restored with the guarantees of the international community and of the EU.”

It will be interesting to see how these positions are received by Ankara and to what extent any of the sides would be willing to compromise against a background of regional conflicts, energy issues and security problems. How, for example, would Greece steer its foreign policy by being friendly with Russia while keeping the U.S. happy?

Against its initial hopes that an uncompromising stance by a radical leftist government would lead to the re-structuring of the Eurozone on a less neo-liberal model, the Syriza-led government appears now to be settling for an honorable compromise. Kotzias takes a more radical look on that.

“If the EU wishes to have a future, they have to ensure the functioning of two principles: rule of law and finding solutions through compromise, dialogue and negotiation. We are in the process of a negotiation and Greece must fight using all the tools available to it, like the veto right, European law, procedures and alliances, in order to face all those who think that Greece should be pushed out so that they can solve their own problems,” he says.

After meeting with Turkish political leaders, Kotzias will be participating in the Foreign Ministers NATO meeting in Antalya on May 13-14, where issues like Ukraine, the Islamic State of Iraq and the Levant (ISIL), Syria, Libya and European security will be among the subjects. His meeting with U.S. Secretary of State John Kerry will be of particular interest after his talks with the Turks.